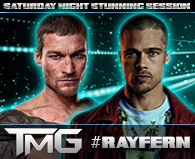 Gimmick: Tweener
Bio:He debuted on TMG with his real lifestyle gimmick he had used for years in School, one that mirrors how he acts each day in real life.

However, being a face with this sort of gimmick gave C.M.Punk relatively little to work with, and simply not alot of people quite understood him.

That all changed When He Joined Totally Radical Wrestling

Finally, Punk had something to work with.

Shortly after losing to Real Razor in a "Career buried alive" match and ridding himself of tmg, C.M, Punk started what was one of the most creative work he had started in recent months before leaving TMG he Fought Kenny McCormick in A Hell in a Cell

This Big Rivalry boosted his career as he now steps foot in Trw looking for better things.

Punk continued to spread the word of his wisdom around the globe of federations in years to come he will soon become the greatest superstar of this generation and the next.